What were the previous series?

The 3rd 100 series (2020) explored what the future of business schools could look like in the current SDG/COVID reality. Scroll through the ideas on the right for more.

The 2nd (examples) 100 series (2017) highlighted 100 examples of innovations from business schools around the world focused on sustainability, many inspired by these ideas. Click here to read them all.

The first 100 series (2014) was 100 ideas of what the future business degree might look like. The ideas were published as a book (Greenleaf 2016) Click here for more information.

Buy the book for more ideas… 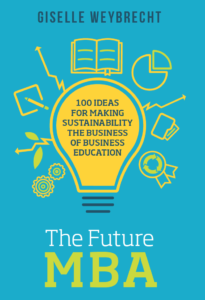 I spend my time looking for ways to engage all sorts of different groups in sustainability regardless of who they are, or what they do. A lot of those I engage, as you can see here, are in management education because I believe that if we change the way that future managers and leaders are taught about these issues, that will inevitably lead to wider, positive changes.

For more information visit www.giselleweybrecht.com or email me at Gweybrecht@thesustainablemba.com 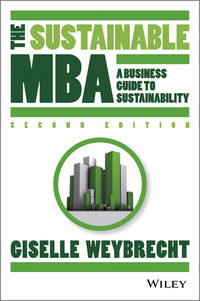 You may not be able to get to Broadway to catch a musical, but what if Broadway could come to you, or rather, you could become Broadway? What if we rethought certain industries, even just temporarily, to create home grown versions, but even still branded and organized by the original, a bit like a franchise? So, for example, Broadway shows could be put on in your country but with local teams/actors etc coordinated by the original teams in NYC. This could become a new Broadway or pave the way for a completely new, home grown version in communities around the world. Obviously, this wouldn’t be just about Broadway, but could be applied to any industry. Business schools would play a role in creating platforms to discuss and organise these possibilities and coordinate this knowledge exchange.